In October, 2002, (according to the invoice we have seen of a removal firm dated on the 18th. of that month), Jim Perrin’s household effects were taken from his previous address in Ruabon, near Wrexham, Denbighshire to ‘Manchester House’, Llanrhaeadr ym Mochnant, Powys — both in Wales. We know that he was living at his new address (and he said so himself, in West) when our sister Jac met him again — such ill fate — after knowing him briefly in the distant past: it was at a reading in ‘the Pavilion’, Llangollen on the night of 29/10/2002.

In earlier posts we have described how Jac had fallen from a loose boulder and badly damaged her ribs whilst at that house: ref. Jac’s accident, spending nearly three weeks there, with intervals when she returned to her own home, in a period of recovery. (A recovery of which Jim Perrin said: ‘I had to keep her pissed on brandy and pain-killers.’ He said this to us, her sisters, and to some of her friends: ‘pissed’ — it was a monstrous thing to say or do… )

There was no question that the house was his at the time, as we have seen paper-work giving details of the property transaction. Later he sold it and moved to our sister’s — a lovely old farmhouse with barns, hidden in remote moorland. Our point is that indisputably Jim Perrin was the owner, as mortgagor, and was the resident, of the property ‘Manchester House’ from October 2002 until he sold it in 2003 — although he had quickly formed his plan to leave it when he began his relationship with our sister. At first suggesting disingenuously he should sell that property and raise funds in order to rent a house somewhere nearer to her: ref. Jim Perrin plans his next move, the idea of renting was nothing more than a lure and one which he abandoned in favour of moving into our sister’s house — this being his intention all along.)

All too soon though, to sell became imperative: as he wrote in a letter to Jac: ‘[She] knows the address.’* He was referring to a former wife (mother of his small baby of whom Jac knew nothing) and he realised that the Child Support Agency — as it was then known — had been informed; that they had traced him; and that as night follows day it was only a matter of time before they caught up with him again. He had lost his advantage and on realising it he was understandably extremely anxious to leave…

Jim Perrin accomplished his ‘lucky escape’ by convincing Jac of the happiness that awaited them in their future lives together — but this was not, initially, as cut and dried as he had expected it to be: ref. Jim Perrin, a cuckoo in the nest. On a more mundane level he spoke of improving her studio with the proceeds of his house-sale — it was only so much flummery as he did no such thing — and said that he would put a second-hand caravan in the garden for his study. (It was the caravan into which he locked himself after Christmas 2004: ref. Jim Perrin’s Christmas and Jim Perrin’s breaking point for the background to this. He refused to come out and threatened to kill himself. He had his little green-handled knife, he said, and he was going to do it! ref. Gone to ground — although we did not include details of the knife in that post; Jac and her daughter told us of it at the time.)

Shortly after he moved to Jac’s house he raised the subject of his anonymity; he asked that her ‘Welsh’ sister might allow him to use her address for his post, saying that he preferred his whereabouts to remain unknown to his many fans or Jac and he would be ‘inundated’. This is what he told our sister, to ensure that he would be able to keep the low profile so necessary to his continuing peace of mind…

As to finance: ‘My star is rising’, he claimed, ‘and my work well-regarded, and with the money from my advances and from my royalties, as well as from my endowment policy when it matures, there will be ample funds for our season in the sun.’ Thus he embroidered his lies to our sister. Ref. Jim Perrin thinks highly of himself.

Moving forward to the present day: we were most surprised when we found only recently, between some papers, two items from ‘Severn Trent Water Authority Ltd.’ They were dated from the earliest days of Jim Perrin’s ownership of his house in Llanrhaeadr ym Mochnant and we include them at the end of this post. One was a standard monthly services bill, with perforation below, from which the slip had been detached and presumably returned with the payment required. Except, while it was addressed to ‘Mr. James Perrin’ and dated 18/01/2003, readers may notice that it states: ‘This is the final bill for this account. Any existing payment arrangement on this account has been cancelled.’ (As of 18/11/2002.) So it would appear that ‘Mr. James Perrin’s’ responsibility to Severn Trent Water had ended. Which is odd because we know that he moved in just one month earlier, 18/10/2002, and continued to live there — neither sharing nor letting the property (and could not therefore claim that ‘A.N.Other’ was liable) until the Autumn of 2003. It can be seen from these details that something was not quite ‘straight’ in Jim Perrin’s arrangements.

However, the second ‘exhibit’ is even more interesting; it is a personal letter from Severn Trent Water to a ‘Mr. James Alvarez’, 17/01/2003, (and the correlation between these dates is most ‘telling’), thanking him for his correspondence and confirming that he now had an account set up for services — to the same property. Why should this be? Our theory is — and some sort of explanation is surely needed? — that Jim Perrin merged his first name with the surname of Al Alvarez in order to create a new account that could not be traceable to him.**

We have been told that Al Alvarez used to climb in North Wales and that it is highly likely he had heard of Jim Perrin, so we wrote to him enclosing copies. We explained that we thought it hardly possible that he had knowingly in any way been party to such a deception as this exchange seemed to imply. Very kindly he has recently responded: ‘…to assure [us] that he knew nothing at all about it.’ — which is, of course, what we felt confident he would say: and we believe him absolutely.

On the other hand we have no hesitation in ‘believing’ that this could only be yet another example of Jim Perrin’s out-and-out chicanery. As his name on the utility bill would be removed by the water authority — and their ‘reply’ could only have been in response to a letter from Jim Perrin himself (as the owner of the property) somehow ‘explaining the situation’ — it may be deduced that he had orchestrated the ‘correspondence’ in order to achieve the deletion of his own name from the then current record of that utility provider…

It is our opinion that only one conclusion can realistically be drawn from the exchange between Severn Trent Water, Mr. James Perrin and ‘Mr. James Alvarez’: which is that Jim Perrin was acquainted with Al Alvarez, however peripherally, and casting around for a new persona his name just happened to come to mind, this rather unusual name… and that he was wilfully and dishonestly using as ‘cover’ the name of ‘Alvarez’.  Al Alvarez is a thoroughly decent and well-respected man and renowned in the literary world. An author, incidentally, whose biography of the climber, Mo Anthoine: ‘Feeding the Rat’, was reviewed by Jim Perrin himself on Amazon, 29/08/2006. (Using his alias ‘Llywarch’ which, as we have explained in earlier posts he has now deleted and replaced, in all his reviews and comments, with another — ‘Tim Bartley’.)

Jac’s sisters really have no doubt of the steps which Jim Perrin has taken; the means by which he has contrived to deceive and defraud over many years are, as in this case of Severn Trent Water, almost unbelievable. And it might be taken into account that we are only aware of these few clues from the short period when he was involved with our sister… actually we have been informed of many other instances. In our view, this was a double-deception: of the water authority and of the Child Support Agency.

Here is the ‘evidence’ which we believe conclusively proves Jim Perrin’s mendacity:

A) The bill from the water authority. B) The letter to ‘Mr James Alvarez’. 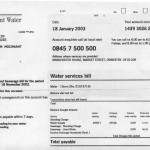 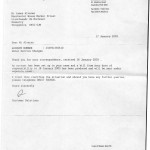 * Another example of Jim Perrin’s exceptional duplicity is that while he ultimately admitted he had a baby with the mother referred to above (it was only because he had been caught out and his behaviour made known) neither Jac nor her family knew that — at the same time there was a second mother with a second baby: ref. Jim Perrin takes to the hills.

** A letter was published in the ‘Cambrian News’, 16/01/2014, concerning the shooting of wild birds on the Dwyfor Estuary. We were pleased to put a link to ‘the Friends of Dwyfor Estuary’, in our post: Is Jim Perrin now writing as ‘DrudwyBranwen’? (the letter can be read here on their website), and the happy result of their petition is that the shooting licences applied for have been refused. But we did notice, which is why we mention it here, that the letter was signed by ‘Janet and James Wolf, Harlech.’ Was ‘James Wolf’ ‘James Perrin? — as we think James Perrin became ‘James Alvarez’ in the earlier attempt to bamboozle Severn Trent Water? He was definitely living in Harlech with his partner Jan Wolf, when the letter was sent and there are unmistakable stylistic similarities with other texts written by him — and in online comments to Guardian Country Diary by DrudwyBranwen. Although the letter was in a worthy cause it also proved Jim Perrin’s endless determination to obscure the truth and by doing so to leave no clues for the CSA.

He is now talking of leaving Harlech ‘for the sake of his health’ — by now he may already have done so — but we have had a number of messages telling us the truth of the matter is that he is going because vast amounts of money are owed to builders in Harlech for their extensive renovation work on his home; work completed, yet for which, so far, they have not been paid: and that the gossip in Harlech is rife! Quite apart from his ever-present concerns about the CSA, Harlech is possibly not the most congenial place for Jim Perrin at the moment…

And in conclusion: Sadly we have learned that Al Alvarez is not well, yet despite this he took the trouble to acknowledge our letter and responded by asking his grand-daughter to pen his reply. His courtesy is much appreciated, particularly when, in his present circumstances, it might perhaps have been easier to disregard the matter; it certainly shows the mettle of the man.

We thank him so much for this, and we would like to send him our very best wishes for his comfort and improving health.