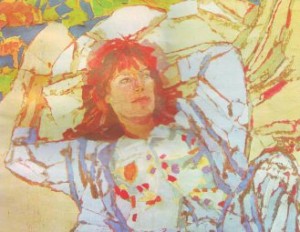 A paper-collage portrait of Jac created by her long-time friend and fellow artist Debbie Lee.

When we read  Sir Andrew Motion’s review of Jim Perrin’s book West in The Guardian, 24/07/2010, as well as the comments which were posted by ‘Melangell’ on the thread which followed, our outrage was such that we felt impelled to respond to the disgraceful insinuations and the lies she had written. Our first comment was removed, yet when we tried later we had greater success as it was twelve hours or so before The Guardian detected our reply and again deleted it.

We had no idea how the system works and were naïve enough to post a comment which, although absolutely truthful, caused offence. (Obviously, to Jim Perrin… ) For our third attempt we invoked The Guardian’s famed freedom of speech. They left this comment up, and we thanked them for it — although they did delete our next.

The remarks which we and others posted were generally responded to by this same ‘Melangell’ who was a most vociferous and scathing commentator, and we came to realise from their content, and within moments of reading them, that they had actually been written by Jim Perrin himself. It became apparent that we were engaging mainly with this ‘faithful acolyte’ and ‘her’ attempts to dismiss us with the use of invective, and threats only transparently veiled, was evident. Comments were posted which we knew (as Jac’s sisters) contained details that were untrue, and we could prove comprehensively they were nothing but the most vile falsehoods.

As we didn’t complain (not realising that we could, so little then did we know) the increasingly unpleasant replies were left up — and they each revealed, we thought, something of the mindset of the person who had posted them. Any reader following this exchange might have been mystified as it had been noted that some of our comments, although honest and factual, became ‘conspicuous by their absence’. However, we have now realised the Internet affords the opportunity of genuinely free speech even though, as in our case — and surely it was clear Jim Perrin had influenced them — The Guardian refused us that same chance. (Nor did they show any sensibility, given our circumstances, as they made their decision to ‘stand by their man.’ It would be of interest to know which editor was responsible… )

Recently and to our surprise many well-wishers who have read that thread have contacted us, advising us to make use of the Internet ourselves: and one in particular has offered his expertise in setting up our site ‘jacssisters’. We are grateful to him beyond measure for his kindness and generosity because (and realising as we now do the great benefit of such an enterprise) we have no knowledge at all of the technology involved, and without his support would be entirely incapable…

Our sister Jac is no longer able to speak for herself. We know that she would have been utterly devastated by the un-gentlemanly purported exposures in Jim Perrin’s dreadful book as well as by the gratuitous comments of ‘Melangell’ (we have mentioned our belief it was Jim Perrin, using an alias, who posted them) but as we said on that thread in a comment of our own: ‘The dead have no right of reply.’ Therefore we intend on Jac’s behalf, and at every opportunity, to set the record straight. We will not hide behind a spurious cloak of anonymity as we feel certain Jim Perrin has done (in our opinion this odious and disrespectful man who claimed he loved her) nor will we use other sophistries, as we know he has. Our intention — by telling only the truth and producing the evidence of what we say — is, as we said above: ‘To set the record straight’ for Jac’s sake.

In a query on this thread ‘joofofthedownes’ asked if we could give something of Jac’s history, and yes, she was certainly a most fascinating and talented person who was greatly loved and admired; by her family of course, but also by so many with whom she came into contact: she was a very special and life-enhancing person. We hope to tell of her life as we knew it — sadly shortened as it was to be, and we have many lovely photographs to show of her work.