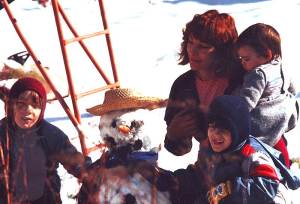 Just days before the Christmas of 2004 Jim Perrin decreed that there would be ‘no Christmas’ that year. It would, he said, remind him of his last Christmas with his son, Will.

Jac’s ‘Welsh’ sister was there on the evening when the announcement was made and hearing raised voices she went through to the kitchen. She found Jim Perrin looming over Jac, who was slipping down, little by little, in the wooden kitchen chair… Her immediate thought was of her sister’s fragility and her seeming inability to withstand the verbal onslaught of the man standing over her, but there was reticence too, a fear of intrusion into what might have been a matter for them only.

‘Is this private? she asked — ‘shall I leave you together?’  Jim Perrin said forcefully, ‘Yes it is’. She got as far as the kitchen door before turning on her heel and saying ‘I don’t care if it is private — you are not to shout at my sister!’ — and questioning Jac she asked again, ‘Do you want me to stay?’ — ‘Yes’, she really would prefer it. He then explained that he had no wish to celebrate Christmas that year. It would, he told us, have sad memories for him — we should be ‘mindful’ of the loss of his son; try to be more understanding, and respect his feelings. Jac had been saying ‘at least we can have a tree?’

(We must tell you; we don’t just have ‘boxes’ of decorations in our family, we have tea-chests full: heirlooms, home-made treasures all with precious memories. Jac’s children had always spent Christmas Eve setting up their enormous, living, tree and they were always at home for this family occasion.)

‘No’ said Jim Perrin. ‘No tree’. Could you believe? He meant it…

Jac went back to the sitting room while her ‘Welsh’ sister, staying in the kitchen, tried to understand and to calm the situation; she told him how important the tradition was for her family  and how, this Christmas of all Christmases — when Jac was so desperately ill — it would comfort her for them all to be there, and how the whole family could cherish her. Her daughter lived at home but the boys were away ref. our post An irrational resentment.

Jim Perrin said: ‘No Christmas’, and to further bully them he told them that he didn’t wish Jac’s sons to come home either! This was such a cruel blow to Jac. Her ‘Welsh’ sister, hoping at least to offer a feasible alternative, said that she could see that he would prefer perhaps, in view of his sorrow, to spend his Christmas quietly in the caravan? He changed tack then and said that he ‘cared only for Jac’s interests. It would be too much for her to cope with.’ This was of course nonsense; he simply wanted to have total control of the situation…

Jac wanted Christmas with all her heart: Jim Perrin did not.

It was explained to him that Jac need not lift so much as a little finger; we would organise things — and if he felt like changing his mind he could come over and join us — or we could, if he wished it, take a dinner out to him in the caravan.  ‘No’, he said.  ‘No — and if those boys do come home for Christmas, I will go. He, repeating this most forcefully, again said: I will go —  I will leave here.’

Looking back, as with these scenarios as it is all too easy to do, we should have called his bluff. But we were uncertain of our ground and of his way with words and his hysterical element when crossed; and his position now of ‘seniority’ within the household led us rather to ‘return the quiet answer’: there had already been so much tension that evening… So, he won his point, and Jac, entirely weakened by her already long and ongoing course of chemotherapy and too frail by now to resist him, let alone stand up to him, did not so much acquiesce as crumble.

Jac’s sons, when told of the situation and trying to do what was thought best, arranged to go South to stay with their ‘Suffolk’ aunt, thus satisfying Jim Perrin’s wish to be rid of them — they had never before been away from home at Christmas: this was Jim Perrin’s fault. Jac’s daughter was utterly devastated by all that had occurred and her ‘Welsh’ aunt saying to her ‘Don’t worry — you will have a Christmas tree’, they went out together on a mission to find a perfect specimen. The tree which was chosen for its particular form and beauty was set up in her bedroom — where Jim Perrin in theory had no jurisdiction — and Jac spent much of that Christmas there, with her daughter, their music and the fairy lights. At one point Jim Perrin barged in, shaking the tree with all its delicate ornaments as he furiously slammed the window shut — this whilst Jac’s ‘Welsh’ sister was there with them. His bullying intrusion was evident: he bitterly resented their temporary seclusion and happiness and made some foolish ‘excuse’ about heating bills…

It was to be Jac’s last Christmas — she had just over four months to live, and Jim Perrin, through his domination and selfish desire, had so engineered things that for the first time in their lives she did not spend it with all of her children; or they with her. We wish that for Jac’s sake we had acted differently: bullies should never be allowed to win the day and of course we should have ‘called his bluff’… 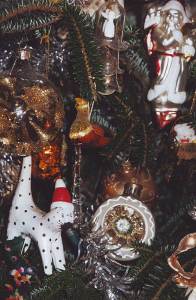