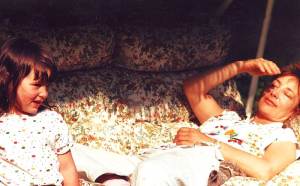 We referred earlier to the accident which our sister had at Jim Perrin’s house in July 2003. This was certainly a pivotal point in her relationship with him. She described it to us shortly after it had happened and as we said: ‘Undoubtedly this injury to her ribs was extremely serious’.

We have wondered ever since why Jim Perrin, as a responsible adult, did not seek medical help for her: he had been a climber with presumably at least some rudimentary knowledge of impact damage. Is he medically trained? For all he knew her lung could have been punctured; she could have sustained other internal injuries. Surely, if she was as seriously hurt as he claimed in his book he should at least have asked for a paramedic, to assess and advise her.

At best he should have put her, by main force if necessary, into his car and taken her to hospital. Whatever resistance she may have made to such a suggestion he could with kindness and love, but firmness, have over-ruled her and driven her to seek the aid which only qualified medical personnel could give.

Alcohol was probably a factor in his decision; we knew they had been drinking wine and driving under its influence is neither legal nor wise, but the next day? — or the next? — when clearly she was not improving? What kind of man is this, who did not ensure that ‘his woman’ was not properly ‘cared for’? He should have sought help — professional help. (We are referring here to something he wrote in West, patronisingly, of ‘how he had cared for his woman in her hour of need…’ )

Instead: he relates in his book that he medicated her himself, ref. p.193, under the guise of her self-medication. He told us of it and he told friends, using these words: ‘I had to keep her pissed on brandy and painkillers.’ PISSED! — these were the very words he used. (But not, of course, in his book… )

And listen too to the phrases in which he described Jac’s accident — with surely what seems an abnormal relish:

p.184    ‘She landed on her side with a crunching thud… her face was contorted in agony.’

p.184    ‘Somehow we got her back in the house and onto the sofa. Two of her left ribs were shattered, their splintered ends visible beneath the skin of her back.’ !!!

p.193    ‘The pain must have been excruciating. Even sitting by her I could hear the broken ribs crunch as she shifted position.’ !!!

We had no idea, from Jac’s own description — though she did tell us how agonizingly painful her ribs were — that the injuries were so very severe as Jim Perrin described. If we had known we should certainly have convinced her to go to the nearest A&E, where it might have been thought an x-ray was required.

On the other hand, if it was ‘only’ a case of ‘bruised ribs’ — and one sister has experienced these, (Jim Perrin, with his ‘knowledge’, had considered that to strap Jac’s ribs was not appropriate! ), she was not strapped up and subsequently has had pleurisy twice on the same site — then his writing is melodramatic: if he was exaggerating — grossly — for literary effect, then his style is sickening and further shows the man’s lack of mettle.

If the account is true and the injury was as severe as he describes we believe that Jim Perrin was guilty of a total lack of any normal response and that he was culpable to an unforgiveable degree.