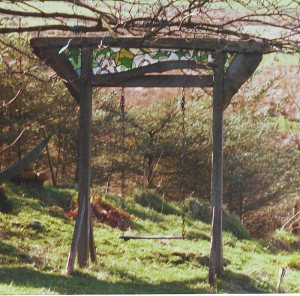 After her penultimate course of chemotherapy Jac was taken by her daughter to stay with her ‘Yorkshire’ sister, as they had arranged between them just after their sad Christmas. That had been a most traumatic time and Jim Perrin’s anger still had not subsided; Jac was relieved, and very happy to be able to go away and to escape the controlling behaviour with which she was beset .

He wrote in his book, West — ‘In January Jac went for three weeks to Yorkshire, staying with a sister whilst she tried different treatments.’ (ref. page 263).

The reason that she went to Yorkshire was to spend time away from Jim Perrin. She even considered staying there for her final session of chemotherapy. She was stressed and unhappy in her own home, so much so that even at that extreme point in her illness she chose to go away to the peace of her sister’s house.

She had not gone there to ‘try different treatments’ although a friend did give her an ‘Indian head massage’ at one point — no, as Jim Perrin very well knew, she was seeking tranquillity and a chance to be stress-free; and for a time to relax with a sister to whom she had been so close all of her life: it was to be her opportunity for quiet, non-judgmental companionship — away from his obsessional tyranny.

Knowing that she wanted — needed — to be calm and peaceful Jim Perrin nevertheless, during this period, constantly harangued her at long distance; by telephone and cards; by postcards and lengthy letters.

The telephone conversations reduced her to tears and in the end she asked her sister, when he rang, to tell Jim Perrin that she no longer wished to speak with him at all.

Jac showed his letters to her sister. Their content was grim and made most unhappy reading: recriminations, even more accusations against her sons, justification — threats to leave her — on and on the words poured, to his ‘love’, to his desperately ill partner, whom heaven knows he had already deeply hurt.

One example: ‘Jac when you and I were at ‘Manchester house’ we were happy together, when I sold it and moved to [your house] and you began to re-engage with your former acquaintances and with your family, things started to go wrong. You say we had months of happiness. I didn’t.’  (And coincidently these similar words were used in a spurious comment by ‘Melangell’ some five years later: ‘Anger at her decreased availability to others caused problems to both Jacquetta and Jim throughout their time together.’)  Melangell’ (JP?)  30/07/2010.

Jac’s ‘Yorkshire’ sister remembers so well one evening when they were sitting by the log fire and recalls Jac silently shaking her head and saying, sadly ‘Where did it all go wrong? — this was at a point in her treatment where she said of herself that she was ‘as weak as a lettuce leaf’.

The distress of our sister; her disbelief at the direction that her relationship with Jim Perrin had for so long taken; the real despair when she came irrevocably to the knowledge that it was fatally compromised, was hard to witness. Her attempts to understand, to rationalise and, for a time, to forgive — and yet to sink ever more deeply into the realisation that the ‘glory days’ were over — this was a tragedy unfolding, and we grieved for her.

Finally Jac decided that she should go back to Wales as her final session of chemotherapy was booked and her forthcoming surgery was imminent. In any event she was missing her daughter and of course her cats — one of whom, Jim Perrin had just informed her in a phone call, had gone missing. Understandably Jac was very concerned when she heard the news, as that particularly loving yet shy female cat was not in the habit of roaming.

When her sister returned from an afternoon’s teaching Jim Perrin had driven up to take Jac home. He would not wait for them to say goodbye.