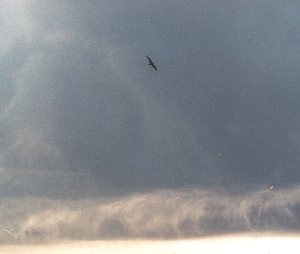 Our sister Jac died on the 11th of May in 2005. The statement is stark; the fact hard to bear, even now. Her family and those who loved her took their loss and dealt with it as bravely as they could. Her children exemplified dignity with deep grief and they were in every way a credit to her love for them.

They arranged, as they knew she would have wished, a ceremony which incorporated remembrance and gaiety. So great was the number of mourners that the chapel could not hold them. The Dean of St. Asaph led the service and his daughter, a friend of our niece, played her harp. Readings were given by Jac’s partners past and present and by her children, sister and friends.

Later they approached the simple willow shell to say their farewells, laying their delicate posies of wild flowers and folded paper messages next to the elegant bouquet which had been placed by her partner, Jim Perrin.

As the tributes were left, a gentle touch, a soft adieu was murmured by each mourner and when the ceremony reached its end, and the song which all the family had loved ‘Don’t worry — be happy’ (by Bobby McFerrin) was played, there were many who were smiling through their tears.  Just as Jac would have wanted, she who made all those around her so happy — and, as her children wrote in the order of service — ‘Mum always said she wanted singing and dancing at her funeral.  Please do your best to oblige as we leave and say goodbye to a very special soul and dearest friend.’

On the 21st. of June — Solstice — her children took Jac’s ashes to a favourite  place where they had holidayed countless times; camping and surfing in the lovely bay of Porth Oer on the Lleyn peninsula. Gliding out on their surf boards they gave her gently back to the elements…

They took her to the sea, which had been her expressed wish. They took her to the place where they had all been so close and happy, throughout their childhood and to young adulthood.  Such a still evening, and the sea was calm — its surface shimmered over entirely with silver in the pellucid light. A rare rainbow was seen to form, the upper bow perfect in its arc although the colours were faint and misted; whilst inside this arc hung a second, by contrast exceptionally vivid and yet only a portion of itself, as if painted with a short brush stroke. Those watching were enthralled by the beauty of it, and they took it as a sign: ‘Don’t worry — be happy.’