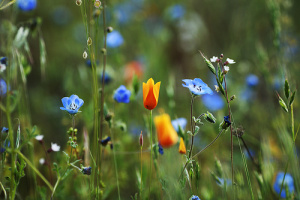 After her stay at Jim Perrin’s house in Llanrhaeadr ym Mochnant — her ‘recovery period’ of barely three weeks when she damaged her ribs — Jac went home to her family and her cats and continued with her life as before. Jim Perrin organised the sale of his property and then, in September, the move to our sister’s house — (the move which he had orchestrated and, it became apparent later, had been his plan all along).

However, this was not at all straightforward as frequently such arrangements can be problematical particularly when there are children involved. So far, before Jim Perrin arrived, their time together had been very short indeed, a matter of only months and then only intermittently, but Jac carried on with her life and her stained-glass work and he continued with his writing — a crucial deadline was imminent and he needed to finish the book on which he had been working. There were incipient problems between Jim Perrin and Jac’s sons, some of which were sufficiently serious to cause real concern, but they all attempted to work through these together.

In the Summer of 2004 Jim Perrin was given the news of which nightmares are made; that one of his sons had taken his own life. Our sister supported him with all her pity and care: but how could a father, in such circumstances, and such deep grief, be comforted? It was a period of utter desolation.