The majority of the details which Jim Perrin has given about Jac, and of the period they spent together, are outright lies. We are able to prove so much of what he has written either to be untrue or gross exaggeration.

Apart from those lies which he has told in his books, and in his interviews and broadcasts, it is our opinion that other ‘tools of his trade’ are the use of implication and of innuendo. These, we believe, have become integral elements of his modus operandi.

There are quantities of examples in ‘West:’ illustrative of how he develops his themes. Firstly he states as a fact something which may be true, or very often is not, and continues to lead the reader to visualise as ‘truth’ the picture which he has painted for them.

On p.3 for instance he wrote:  ‘I started the engine of the old black Citroen. It had been Jacquetta’s favourite. She called it our ‘’gangster car’’…‘  (Such rubbish) and, on p.4:  ‘My son Will had borrowed it from time to time, for the style of the thing… ‘

And this, on p.130: ‘My old Citroen parked on the forecourt of the house came in for its fair share of attention too, most of it friendly from the older men of the village. ‘

The ‘implication’ and the picture being created in readers’ minds, is surely of the long-nosed Citroen of the ‘Maigret’ films for example? The Lt 15s?

Later he wrote: ‘the car creaked up on its suspension,’ (not, then, the Lt 15 implied before) although the several future references in the book of ‘the old black Citroen’ serve to ‘set’ the gangster car image.

But Jim Perrin’s car was not ‘old’; it was merely a not very new XM which he had importunately, and unsuccessfully, pressured Jac’s children (only three days after she had died and actually before her funeral service) to exchange for the younger Xantia which had been hers… 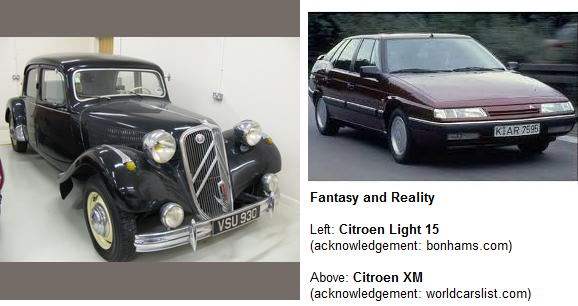 This paragraph was written as early as page three of the book (and was already a lie being planted) but it is with the rest of the paragraph that we take issue; with the extraordinary accusation Jim Perrin made about our sister:

‘…our gangster car (and in it, daredevil and subversive to the last, she’d collected a speeding ticket that had arrived days after her death. This time [implying others?] I was spared the need for tactics or argument to save her licence).’

We know, as we saw the receipt, that he made a payment of £60, the fine for ‘a speeding ticket’? to the clerk to the justices on 30/5/03, but we have shown in preceding posts the chronology of Jim Perrin’s relationship with our sister. They were not living together in May 2003 nor indeed until some three and a half after the date on which that payment was made.

It can by now only be surmised as to which of them incurred that particular fine; which of them was the most likely to have been at the stage of needing their licence to be ‘saved’ — this of course indicating it to be already point-laden? Our sister, or Jim Perrin — he who was travelling around the country in the course of his writing career? But, in any event, that was back in 2003: our sister died two years later, in May, 2005.

However, as we quoted above, later in his ‘story’ Jim Perrin wrote: ‘She’d collected a speeding ticket that had arrived DAYS after her death’… (Our capitals.) We have today, 8/10/11, spoken with the police about that last sentence and they told us that a ticket for a speeding offence ‘is usually sent within two to five days but that it can take as long as a fortnight in busy times such as bank holidays.’

We have written in earlier posts of how Jac had been driven by her daughter to Yorkshire in January, 2005, as by then she was already so very fragile; and we know that for many weeks before she was no longer able to drive herself. She was certainly not doing so within over a month of her death; and for the last week of her life she was in hospital. The police confirmed that there is no way our sister, in the circumstances we described to them, could possibly have ‘collected a speeding ticket’ within that time frame: they told us it simply could not have happened.

Also, here it may be remembered that Jim Perrin was so controlling in his ways that he had taken it upon himself to immobilise Jac’s vehicle by underhandedly (that is secretly, and without telling her) changing her security code, ref. our post The Serious Rift so that she could not use it; could not leave, for whatever reason, of her own free will…

As for ‘daredevil and subversive to the last,’. Nonsense. Jac was neither and it is wicked to so describe her. It is an insult to her and, by the obvious twisting of his ‘facts’, to the intelligence of his readers.

We have frequently noticed that Jim Perrin shows a tendency in his writing to attribute to others the traits which he himself so manifestly possesses: it is our opinion that he lies for effect. It is clear that he was most definitely lying in the matter of Jac’s ‘speeding ticket’.