In April of this year, on Amazon, we read an intriguing review of Shipton and Tilman. Written by Mr. Bob Comlay, 27/04/2014, it seemed he had first-hand knowledge of one of the subjects of the book, and he was by no means complimentary to the author. Therefore it was hardly a surprise — when one considers his scorpion’s sting — that ‘Llywarch’ countered with an attack in support of his hero, Jim Perrin (we of course believe ‘Llywarch’ is Jim Perrin!): the posting of this poisonous comment was evidently an attempt to devalue and even to invalidate Mr. Comlay’s review.

Readers may recall reviews of books by Wade Davies and Harriet Tuckey, posted by ‘Llywarch’, see our posts: To review or not to review and Can Jim Perrin be taken seriously. Whether commenting or reviewing he is frequently vile.

By contrast, ‘Llywarch’ himself also reviewed Shipton and Tilman, 30/03/2013, in the most flattering terms (awarding the ubiquitous 5 stars) — as he did when reviewing other books by his ‘friend’, Jim Perrin: Snowdon, 14/03/2013, Travels with the Flea, 16/10/2009, and River Map, 30/10/2009. Go to all reviews by ‘Llywarch‘ (except, later note, you will be redirected to ‘Tim Bartley’ — the new alias!) — to read in full the disgraceful and quite preposterous propagandizing of Jim Perrin’s prose and the denigration of his literary competitors.

It is interesting to note that ‘Mole’ posted equally flattering and lengthy — and stylistically identical — reviews of Shipton and Tilman, 13/03/2013, and, on the 30/03/2013, of Snowdon. (As did ‘Seamus’ on the 15/11/2013. Might the fleeting, and so far single, use of this alias have been prompted by John Appleby’s rather good and de-bunking blog posted on ‘To Hatch a Crow’ where Jim Perrin is heavily featured?  Dr. Seamus O’Perrin and his coat of many colours.) In fact all three aliases, as we suppose, were used to review Snowdon — such a well-thought of book, and the correlation between those postings is, we feel, most revealing…

As it was as long ago as 2010 that we first suspected ‘Lywarch’ was an alias (that is, when we started to use the internet) we need no convincing, but for any who do still doubt that ‘Lywarch’, ”yrhenwr”, Portland, Oregon.’ is not Jim Perrin, Harlech, Gwynedd, North Wales, (moved on now, of course — several times) the following details may be of interest.

We wrote in our post, Pearls before swine? :  ‘Similarly, ‘Llywarch’ now seems silent.’ but, as they say: Speak of the Devil! Possibly Jim Perrin was amused when he read those words (and we know that he regularly visits our site, one of his friends has confirmed that he does…) for, as ‘Llywarch’, he had posted only three days earlier the ‘poisonous comment’ we referred to above; obviously, thinking he could improve it he had edited it within four hours.  (We have noticed that invariably Jim Perrin — using whichever alias he favoured at the time — frequently edits his comments.) Even so, thinking better of it, he then deleted what might have incriminated him and it was available to the early-bird reader only for some twelve hours or so before it vanished. However those who missed it need not feel disappointed: ‘We have a print-out.’.

Understandably Mr. Comlay was not inclined to take this obvious ‘plant’ seriously and he, and by a strange coincidence, answered ‘Llywarch’s’ comment with the same retort as had our young relative in 2010: ‘Jim…’ (See Llywarch replied to one of Jac’s family.)

We are including Mr. Comlay’s review to show its worth to a new audience and also to show why Jim Perrin took it so much to heart. Clearly outraged by the very open and public doubt expressed as to his veracity and the criticism (heavens!) of his work; provoked and infuriated by the wound — as he would have felt it — to his ‘amour-propre’, he responded with this quite outstanding example of ‘Llywarch’s’ style. Hard-hitting, it even included ‘name-dropping’ to show what good friends he had been with HW Tilman who, no longer alive, cannot refute it. Typical of Jim Perrin’s tactics.

Again, as on the ‘Guardian’ thread when using his alias ‘DrudwyBranwen’, 25/05/2014, (see Pearls before swine?), he simply cannot restrain himself whenever anyone has the temerity to query his wondrousness. Is it possible that Jim Perrin is losing control? It is difficult otherwise to account for what are his, surely, ill-judged and nonsensical outpourings. Machiavelli said: ‘It is a fool who by deceiving too much lost the fruit of his deceit.’

Here, in order of posting, are: Mr.Comlay’s review of Shipton and Tilman; ‘Llywarch’s’ insulting response ( which very soon after he deleted and probably thought it had safely vanished) and Mr.Comlay’s tersely courteous comment by way of reply:

[Click the screen image below to enlarge for comfortable reading] 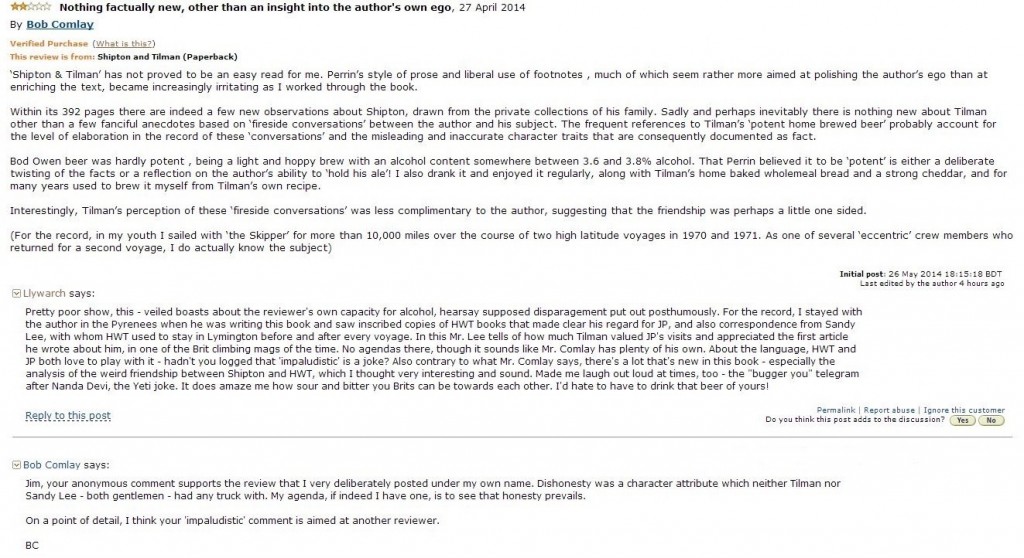 We feel certain that this single exchange shows compelling evidence of what we have been saying since 2010; that ‘Llywarch’ is an alias deceitfully and long used by the author, Jim Perrin; and it is only surprising, in view of all that we have written on the subject — the suspicions which we have voiced, and the examples we have shown — that he has audaciously continued with its use. And this is without taking into account the flagrant dishonesty and lack of integrity demonstrated by Jim Perrin’s use, on an almost industrial scale, of a variety of aliases over the years. To puff his own work is discreditable enough and when once ‘seen through’ a very bad business indeed, but to write so unscrupulously and with such venom as he has about the work of others is, it seems to us, to be in another order of wickedness and should neither be forgiven nor forgotten. He has quite ruthlessly attempted to harm the reputations of his literary peers and without any shame; even when found out, he continues to use aliases to further his own ends.

Could this disregard, his obvious sense of invincibility in the face of all accusation and evidence, point to what we have suggested in previous posts? — that, in our opinion, Jim Perrin shows signs of what might well be thought sociopathic behaviour? We really do believe that it is so…

PS. 10/09/2014:  The review which we mentioned above, of Jim Perrin’s Shipton and Tilman — posted by his alter ego ‘Llywarch’ on the 30/03/2013 — has now been deleted. We wonder why? As only the person posting a review on Amazon may delete it (unless it has not conformed to their stringent and transparent standards…) we may safely assume that it was Jim Perrin himself who did so. His flattering words were not lost however as he re-posted them with added unpleasantness about those who were ‘agin’ him, using the alias ‘Tim Bartley’. He used the same date as the original — as it was a straight switch — which was rather careless as with his first words the fraud was revealed; discussing others’ slighting comments when he had been the first to comment! (“Sad that some of the reviews and comments here should be based on jealousy and malice.”) But, that apart, it gave those interested the chance to see him in his true colours. This ‘switch’ proves, yet again, how exceptionally slippery Jim Perrin is… His revised review may be read here (while it lasts! — but we have a print-out…)