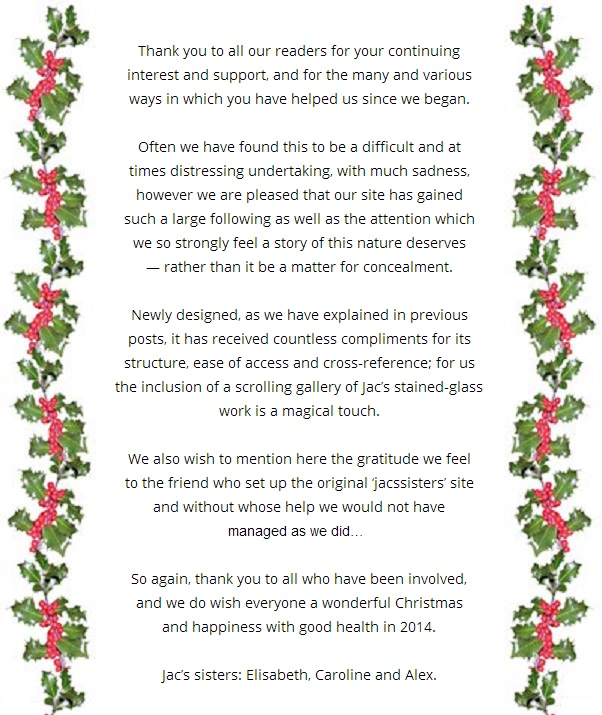 When this title was first posted on the 5th of February, 2011, we had no idea that by then Jim Perrin had charmed at least three young women into becoming involved with him: this was in the five years up to 2010 which followed the death of our sister on the 11th of May, 2005 *.

Whilst he was using one of his aliases, Melangell (as we believe he did) to plant his comments on The Guardian thread we had not at that time been informed about those relationships. The first, as we were later told, he conducted within only a year of Jac dying…  going to a house (again in Llanrhaeadr ym Mochnant) bought with funds mainly provided by his new partner, and as he himself wrote in West: ‘Moving in on the anniversary of Jac’s funeral’…

Jim Perrin’s grief for the loss of our sister, short-lived as evidently it had been, obviously was no longer of consequence (though we were not aware of this) when in 2010 he posted in The Guardian the comment we quoted in ‘Overheard at the funeral by ‘Melangell’ (JP?)’

So: five years after our sister died, Jim Perrin’s intention seems to have been two-fold: posing as ‘Melangell’ to promote by that dialogue with Jac’s sisters his then recently published book, West: (and the useful and continuing saga of his Terminal Lung Cancer) and to vilify us. He sought to support and strengthen his own cause by the use of spurious ‘facts’, and by lying about us he attempted to destroy our credibility and reputation.

It is now quite clear: unknowing as we were and thus writing as we did in the penultimate paragraph of our previous post we gave Jim Perrin far too much credit for what we imagined to be his distress…

* We have now learned that there were at least five young women in that period.

There might be an interesting programme, Psychopath Night, at 9pm. tomorrow, Saturday 14/12/13 on Channel 4…

Jim Perrin recently read from his new book of short stories at the Aberystwyth Art Centre bookshop. As reported for the New Welsh Review by their correspondent:’In fiction, you can reveal all your psychopathic yearnings without concern for consequence,’ Perrin told the group of avid listeners, laughing.

We have drawn attention to this because since the inception of our site we have said it is our ABSOLUTE belief that Jim Perrin does indeed have many particular psychopathic behavioural traits; as opposed to ‘yearnings’. In all the examples we have shown concerning his attitude to his innumerable relationships, (not just with our sister, Jac) — his willingness to lie; to abuse physically, emotionally and financially — we write in the sure knowledge of truth which is backed, of course, by evidence. His alacrity over the years to behave in ways entirely underhand; his use of extreme violence towards his partners in order to achieve his ends; and, in his literary world, his use of aliases to present himself ‘as other’ to bolster his own career and to damage others’; to write anonymous and scurrilous letters to influence both judging panels AND landlords… always with a supreme sense of omnipotence as he has pursued these aims — and throughout, with no sense of empathy at all — shows, in our opinion, that Jim Perrin may indeed have a psychopathic personality.