When we left the hospital on the day of our sister’s death, it was almost reluctantly; in that dazed and still unbelieving state which follows such bereavement it seemed somehow insensitive — too soon — to leave her: and yet we realised that in essence she was no longer there.

Her daughter had taken home with her the yellow balloon that she had painted with a ‘Smiley’ face before giving it to Jac and tying it to the bedhead in her hospital room.

Later Jac’s family and others who had loved her gathered by the pond which she had created herself some years before — fringed with blue iris and wild flag — and in which the goldfish moved gracefully, forming their patterns of calligraphy in the mellow evening light.

After a little while — a time for gentle private thoughts and prayers, the yellow balloon was released heavenwards into the mourning purple of the summer darkness. 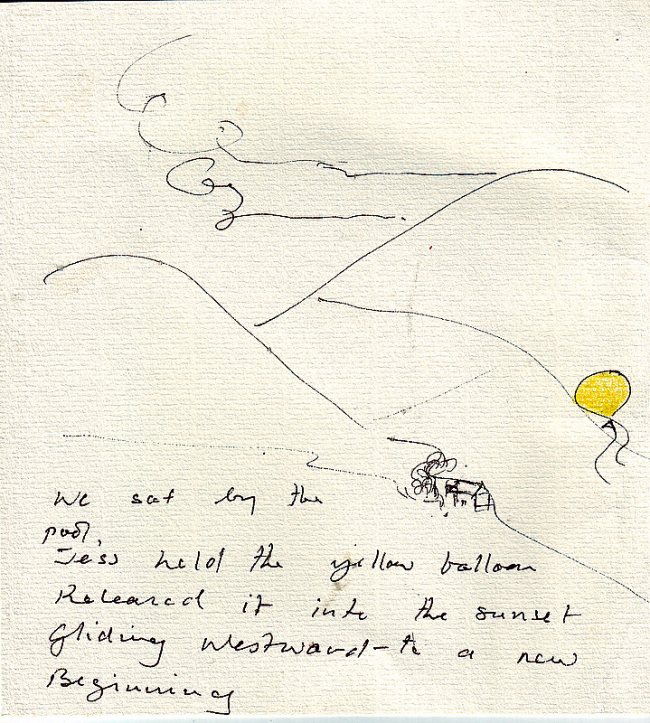 This charming little ink drawing and prose poem was sent by Jac’s ‘First Love’ to her daughter after that evening, and we thought that it would be a fitting interlude in our posts. 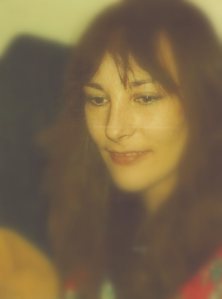 In part four of this account we stated that ‘He’ (Jim Perrin) ‘had left her to die alone’.

Horrific as that sounds we have tried — really tried, to find an explanation for his actions. If he had previously thought, as we all did (and as he had actually told us, after he had left the hospital on the eve of her death) that Jac ‘was a little better tonight’ — why — and here is the glaring anomaly, did he say in both his article ‘Touching the Void’, (this title is plagiarised from a book by Joe Simpson), and in his book West — that he actually knew then that our sister was dying? — and certainly, by the use of subtlety and actual sophistry, in words and phrasing, give the reader to believe that he was with her; both during that last period of time and right up to and including the moment of her death? (actually just before a quarter past midday, not ‘about 11.00 am’ as he wrote). END_OF_DOCUMENT_TOKEN_TO_BE_REPLACED

When our sister left Yorkshire and returned to her own house it was to find, as Jim Perrin had told her in a telephone call, that one of her cats (the most timid) was still missing.  It was only when she was back in Wales that he described to her the night on which this cat had disappeared — never to return.

Jim Perrin confessed that there had been the most terrible sound outside his caravan: really wild ‘screaming’ as of perhaps, a cat fight.  We thought this unlikely as Jac’s cats generally lived in harmony — apart from the occasional short spat — and certainly fighting was not known among them; but we wondered, and said so to Jim Perrin, if ‘Moon-cat’ might have been carried off by a fox, so dreadful were the sounds that he had heard and described to us. END_OF_DOCUMENT_TOKEN_TO_BE_REPLACED